We’re delighted to announce that both our Brislington and our Chipping Sodbury showrooms are reopening on Monday 12th April 2021!


All of us at JMI Bathroom and Kitchen Centre look forward to welcoming customers old and new back to our showrooms again.


Our staff are on-hand via phone and email to book new survey appointments and answer any queries you may have in the meantime.


Thoughout lockdown, we have continued to carry out both installations and free no-obligation home visits, and our quotation and installation services have remained fully operational.


The reopening of our showrooms is allowed for by the new government guidelines and was long-awaited. Hope to see you there soon!

The History of Bathrooms and Toilets Part 2: Early Modern Era

Welcome to the second part of JMI Bathrooms and Kitchens’ look at the fascinating history of bathrooms and toilets!

Following on from Part 1, we now guide you through the early modern era, from the 1700s to the mid-20th century. 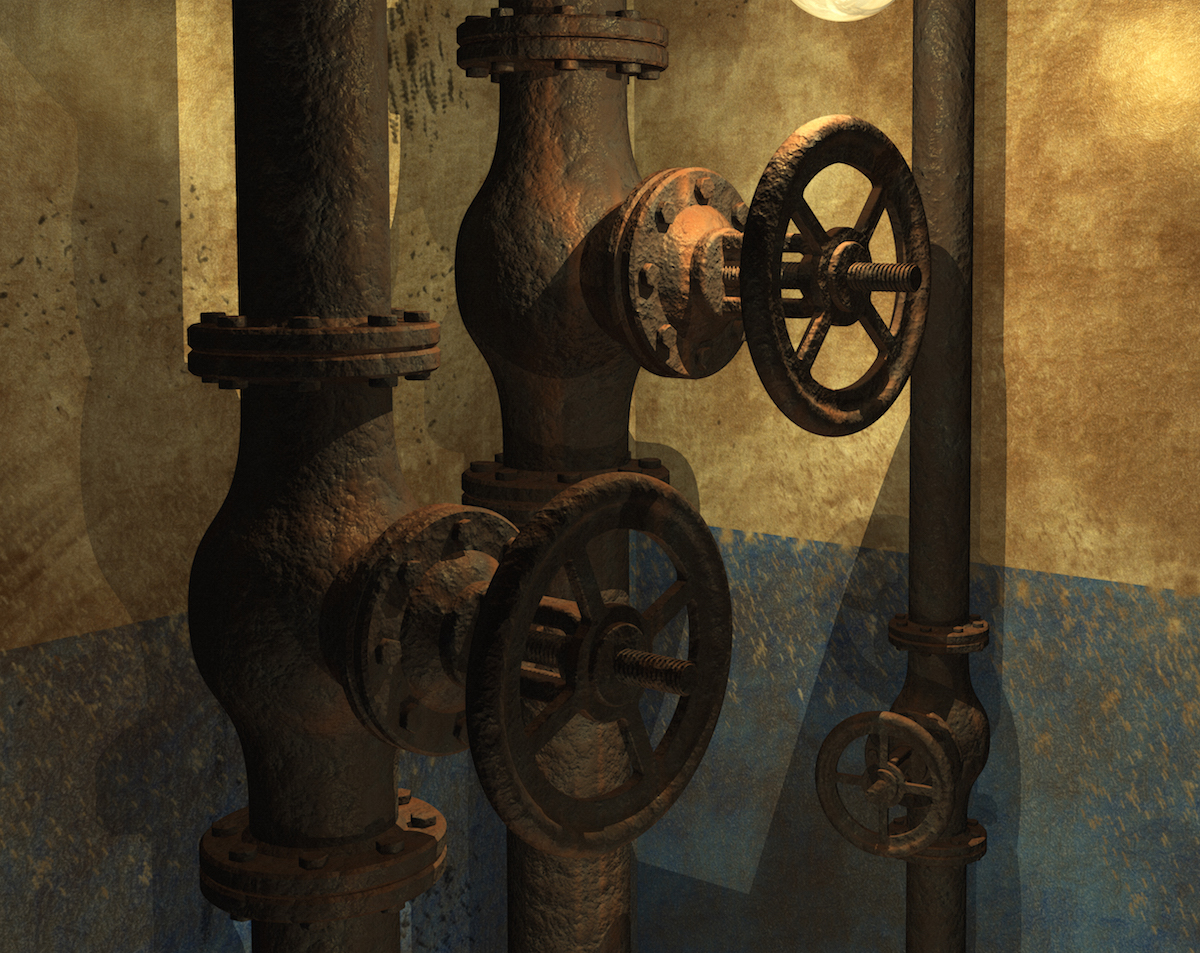 In the 18th century, the first public water supply networks (examples of old water supply piping pictured above) were installed in London by private companies. They served limited areas of the city, allowing the wealthy to access fresh water on tap. Washbasins were installed in bedrooms and used as part of people’s dressing routines, but mainly for washing the head and feet. This was often done in social company. 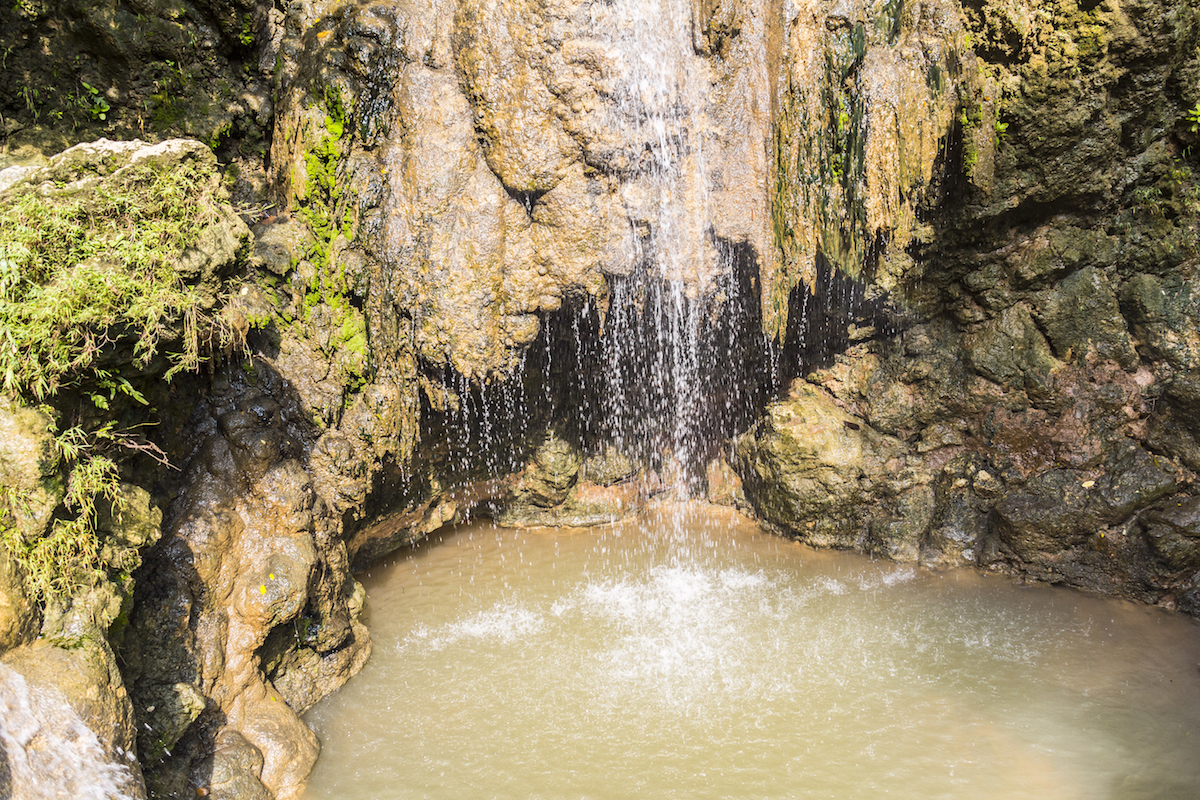 18th century doctors sometimes prescribed bathing in mineral water springs (overseas example pictured). A hospital was opened at Bath in 1742, based around the concept of the therapeutic use of the local spring water. 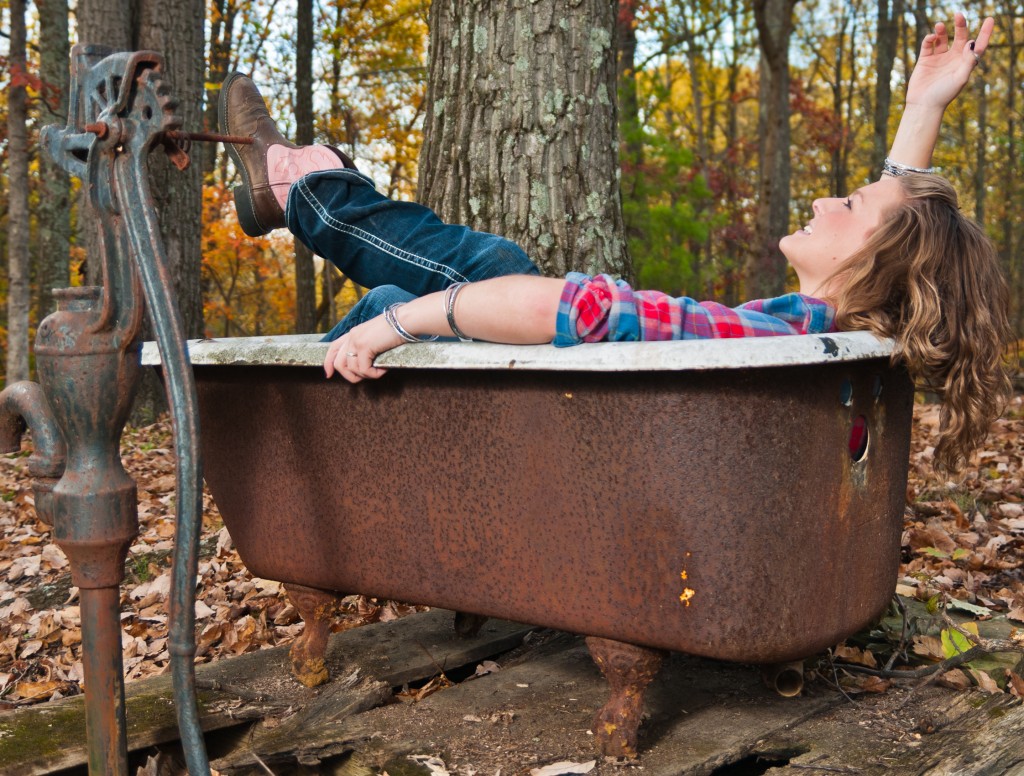 The clawfoot tub (well-worn vintage example above), a classic style of free-standing bath-tub, was designed in Holland in the mid-18th century, and gradually became popular in Britain, being especially commonly found in the late 19th century.

Londoner William Feetham patented the first modern shower in 1767, based on a hand-pump mechanism filling an overhead tank, whose contents were then released by the pull of a chain; but the system was limited by its recycling of dirty water and its use of cold water. More advanced systems using nozzles to distribute the water were gradually phased in from the 1810s to the 1840s, but still worked on the principle of recycling dirty rinse water.

Cumming’s design was adjusted in 1778 by a Mr. Allen using a hinged valve under the pan to address the tendency of the existing model to freeze in cold weather; but the patent for this invention was credited to one of Allen’s employees, Yorkshireman Joseph Bramah.

The ballcock, a mechanism for regulating the filling of water tanks such as those used by flush toilets, was invented by Mexican priest José Antonio de Alzate y Ramírez in 1790.

The modern water tap operated by a screwing action was patented by Guest and Chrimes of Rotherham in 1845. 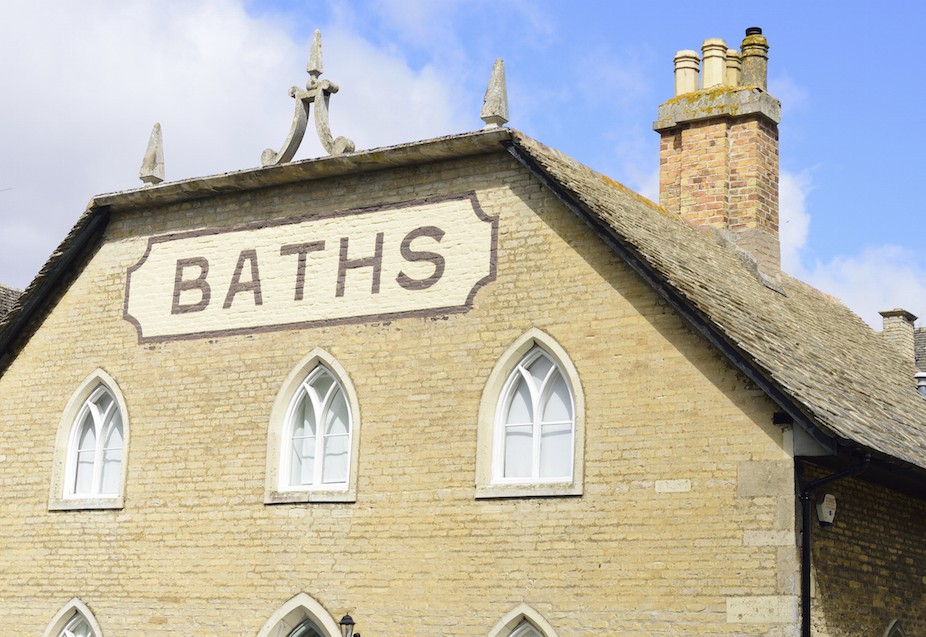 From the mid-19th century, public bath houses were re-established in Britain (example pictured). By 1915, all English towns would have at least one bath house.

Public pay-toilets costing a penny per use were introduced in London in 1851 (surviving external architecture of a later Victorian example shown above), and are the origin of the common British euphemism for using the toilet, ‘to spend a penny’.

The first patent for a siphonic flush was lodged by Joseph Adamson of Leeds in 1853. This automatic flushing system used a pivoted cistern balanced by a counterweight. It was further developed by George Jennings, who took out a patent on his improvements in 1854.

From the 1850s to the 1880s, there were many further innovations in flush toilet design, with different manufacturers introducing and often patenting their own original variations on the theme. 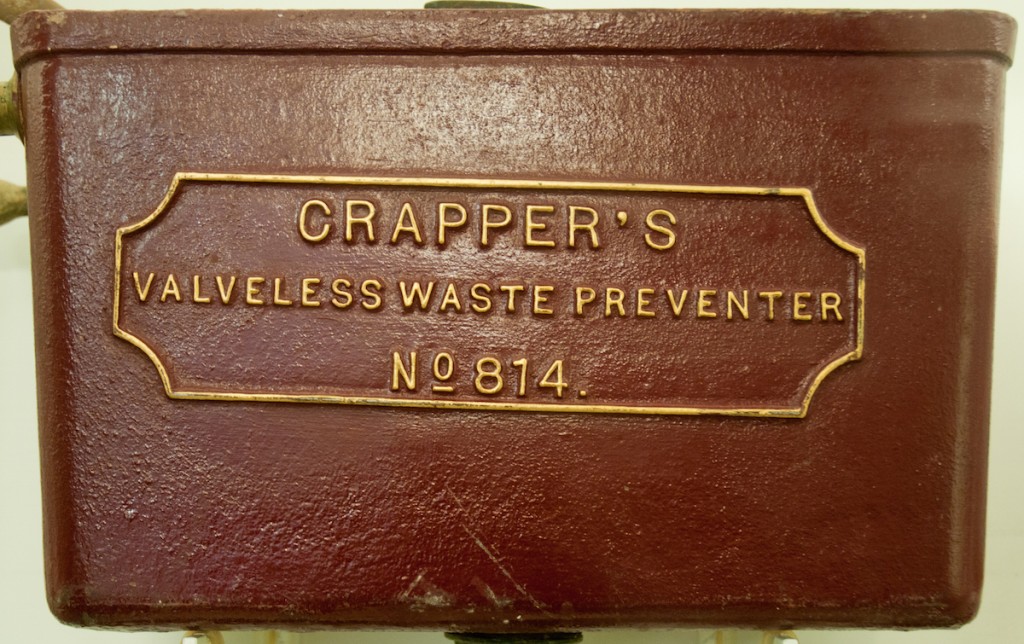 One of the best-known Victorian innovators, Yorkshire-born Thomas Crapper (example of one of his designs above), secured nine patents relating to plumbing, three of which were for improvements to toilets; but his advertising laid false claim to some patents he did not have and some inventions (such as the siphonic flush) that were not his. One of his innovations was the modification of the S-bend to the modern U-bend. 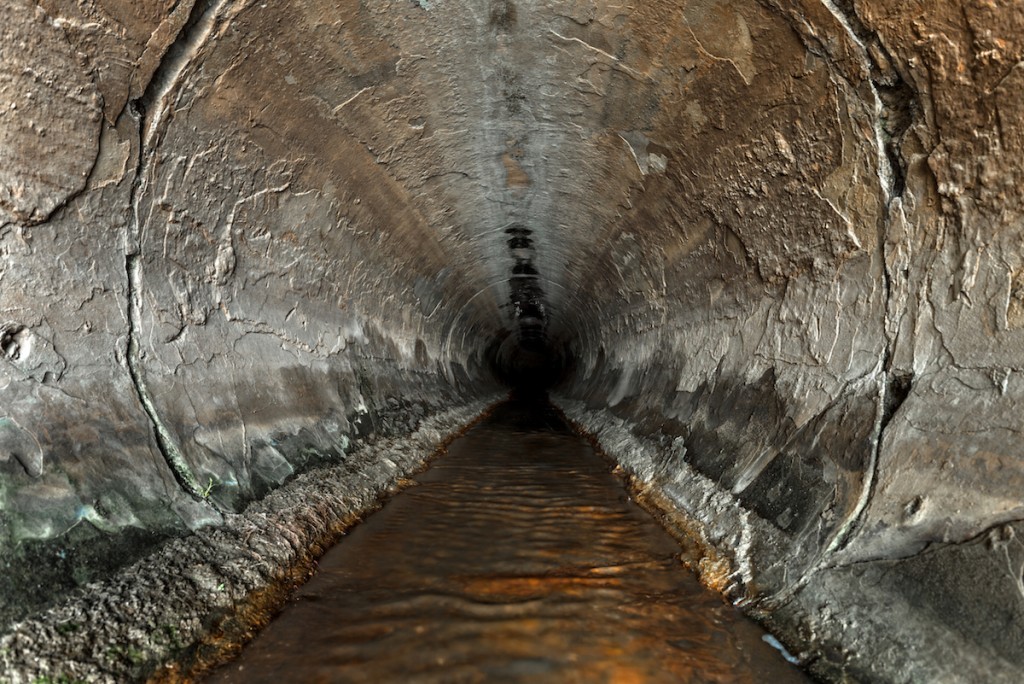 After the ‘great stink’ of London in the summer of 1858, civil engineer Joseph Bazalgette was commissioned to install sewers (example above) in the city. His engineering works were carried out from 1859 to 1865, constructing sewers that fed into the Thames Estuary downstream of London, significantly reducing river pollution in the city itself. Universal fresh water piping was also installed in London after this time. 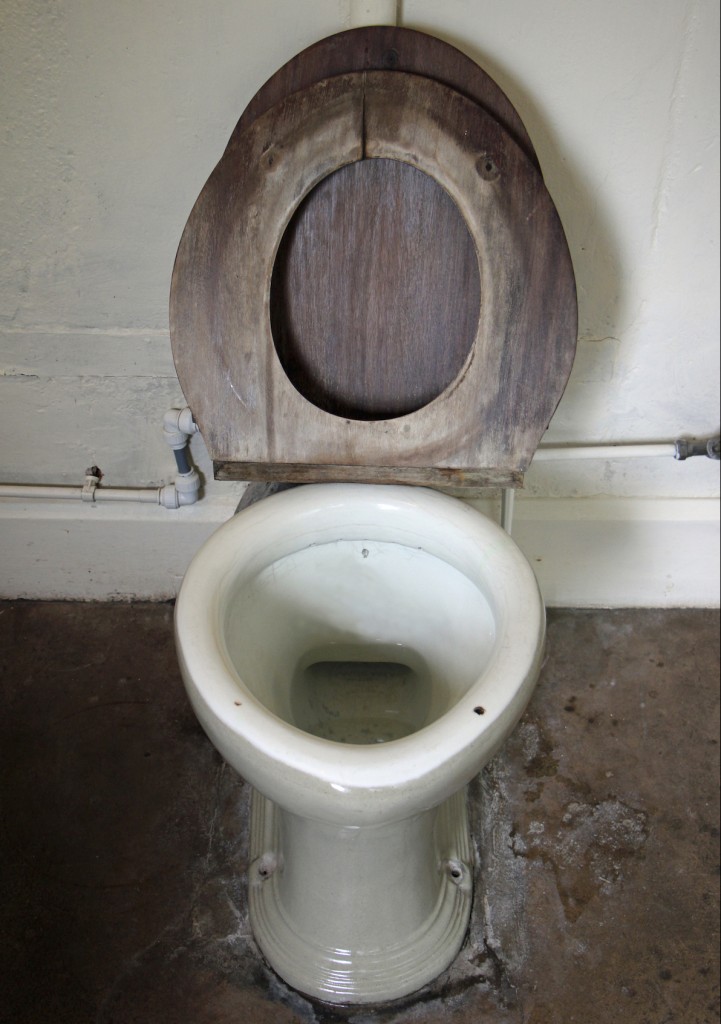 After London’s sewerage system had been installed, most new homes there were fitted with dedicated toilets (antique example shown above) and bathrooms for the first time.

In the United States of America, sewerage systems also began to be installed in major cities such as Chicago in the 1850s.

In parts of Britain, the industrial poor and lower classes housed in densely populated tenement buildings had to share a very limited allocation of bathrooms, baths and toilets for many decades to come. 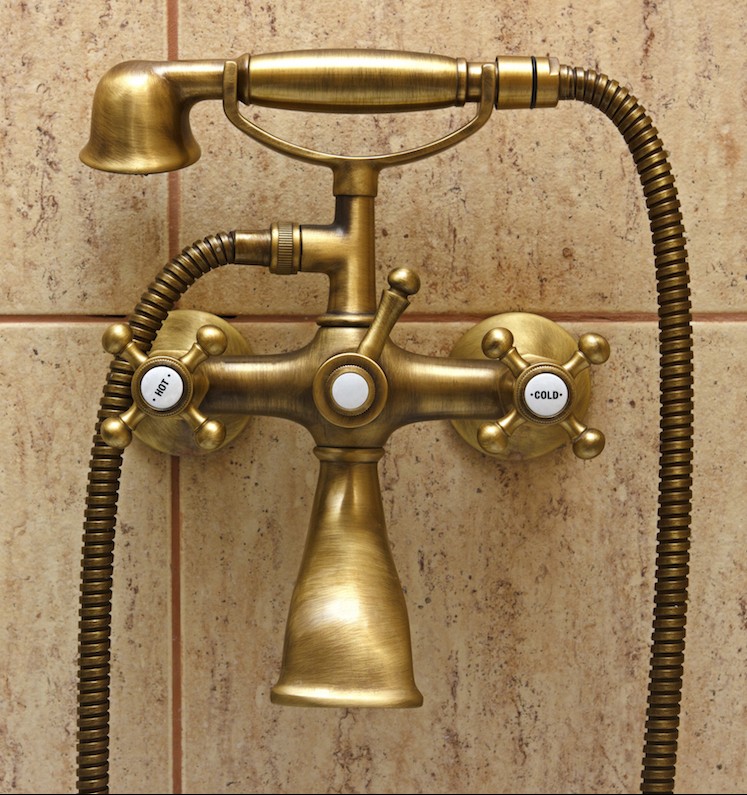 Once fresh-water plumbing became widely available, showers (modern antique-style unit shown above) became linked into it, and stopped recycling dirty rinse water as the earlier ones had done. 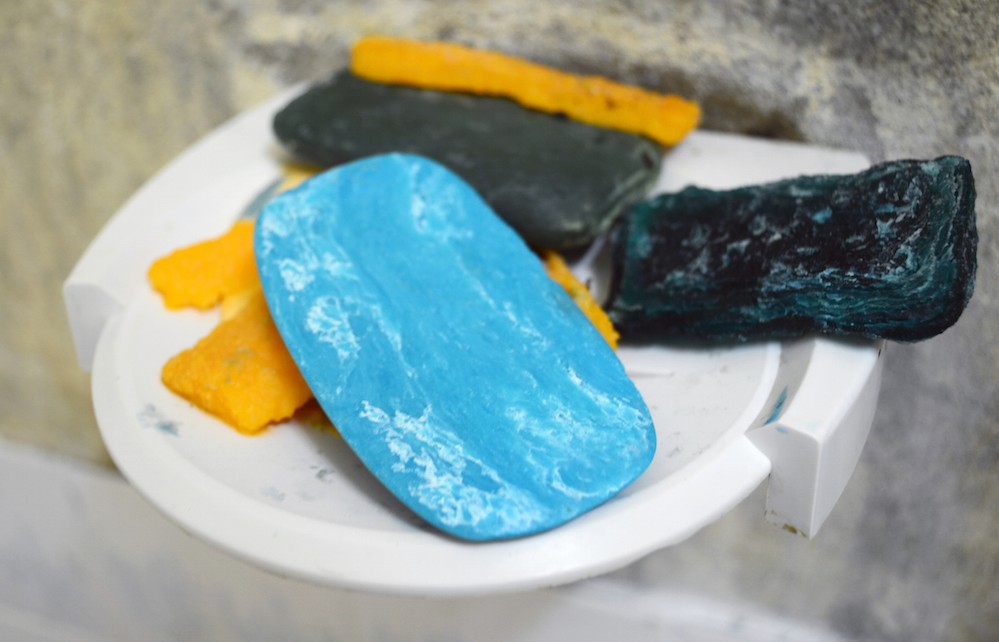 Advances in the scientific understanding of infectious disease such as the first discovery of a germ by Louis Pasteur in the 1860s, with viruses first being identified in the 1890s, engendered an improved understanding of the relationship between health and hygiene, furthering the demand for modern bathroom technology and plumbing. The use of soap (pictured above) to clean the body became regarded as necessary.

It was common practice, especially in poorer households, for a single tub of bath-water to be shared by all members of the same family.

Plumbing remained largely restricted to cold water until the late 19th century, with individual pots of water being heated up for use in baths. In upper-class households, this task was performed by servants.

In 1868, the gas-powered instant water heater was introduced by Benjamin Maughan in London, and was used in bathrooms for showers, sinks and bathtubs, but lacked a flue to remove gas. It was superseded in 1889 by Norwegian engineer Edwin Ruud’s introduction of the gas-powered hot water storage tank. 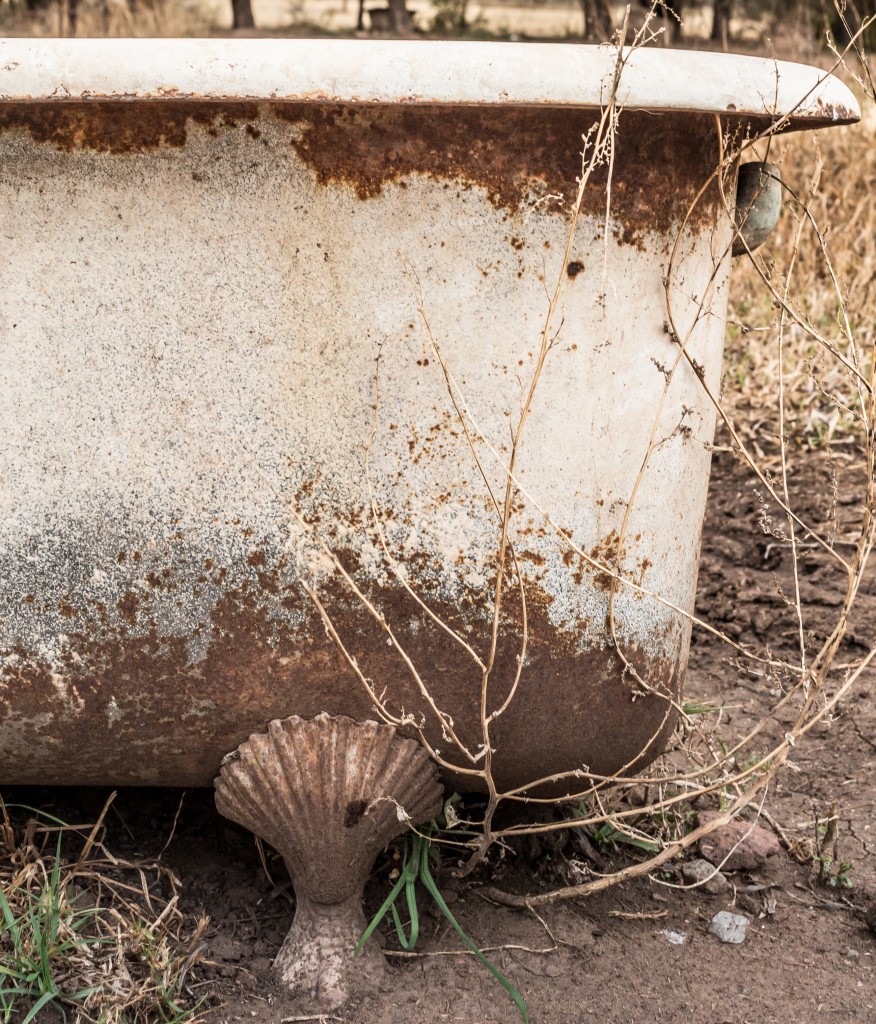 Modern porcelain enamelled cast iron bathtubs were introduced in the 1880s by Scottish-born David Buick in Detroit, and soon became popular. Prior to this, thinly painted cast iron, tin and copper designs had proliferated (rusty example shown above).

Did you know? The first flushing toilet in Bedminster was at the police station!

The practice of permanent chlorination of the water supply to treat it for infectious agents was introduced in Lincoln in 1905. 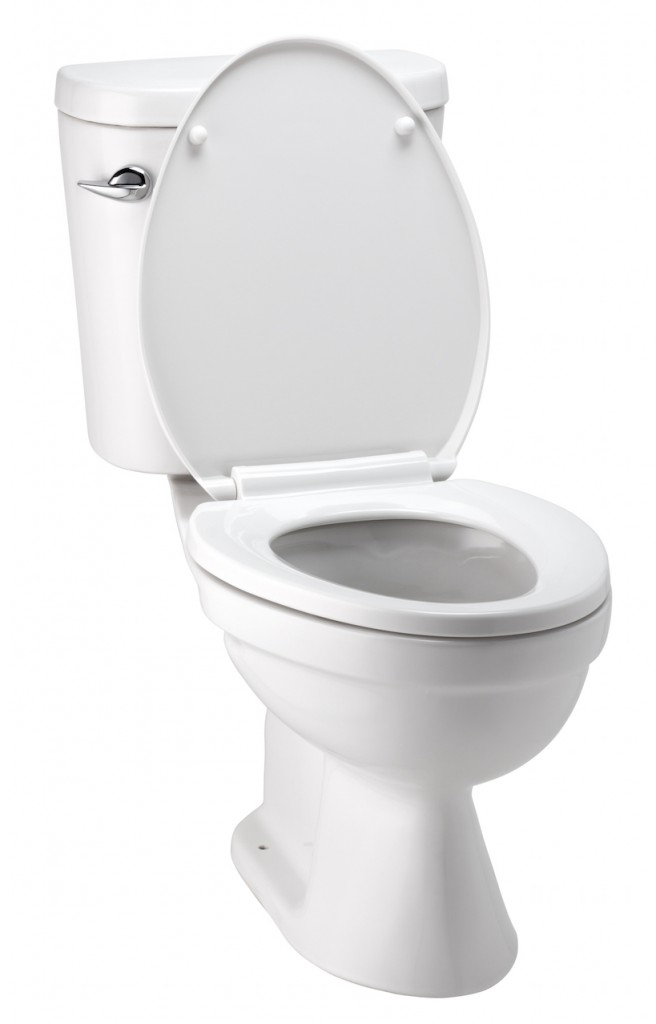 In 1910, the modern closed tank and cistern toilet design (as above) was introduced, and began to supersede the older designs with elevated water tanks. 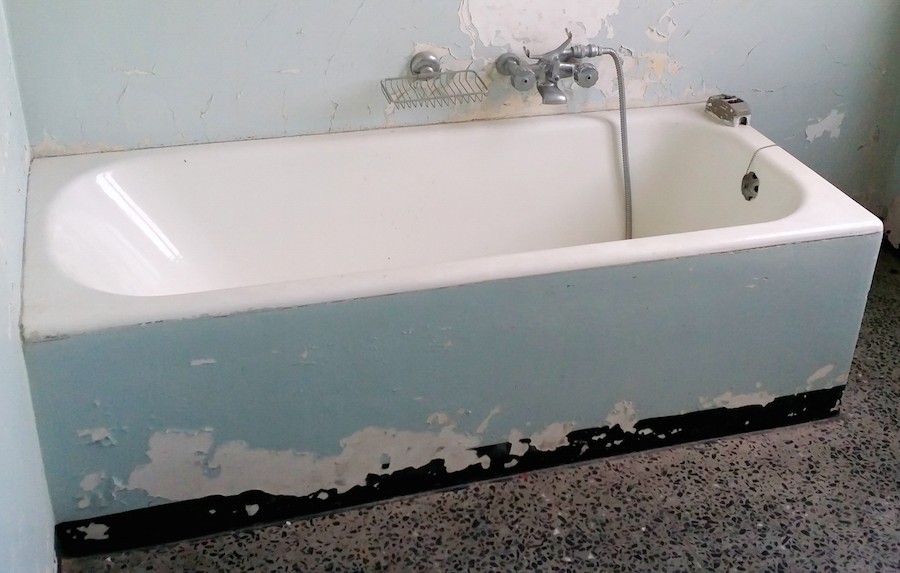 Free-standing bath-tubs would remain standard until the mid-late 20th century, when built-in ones with apron fronts (peeling old example above) finally superseded them.

This wraps up our tour of early modern developments in the history of bathrooms and toilets. We hope you found it interesting and learned some fun facts and shareable anecdotes you didn’t know before!

Welcoming you back to the 21st century again, JMI Bathrooms are pleased to offer you the very latest in bespoke bathroom design. 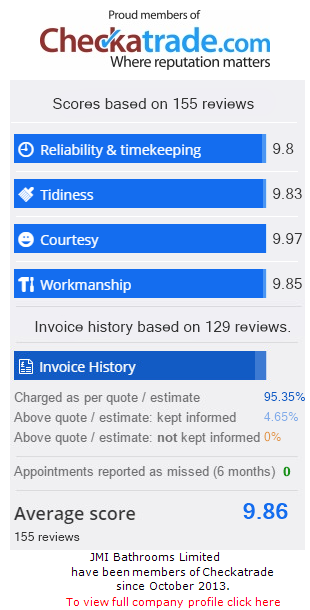